We’ve been focussed on added debugging tools to Roadie Backstage so you can figure out why things are not working as you expect.

This theme is an ongoing priority at Roadie, so you should see even more stuff like this next week.

We’ve reorganized the tabs in the administration area to ensure that the most widely useful pages are easiest to access. We’ve also added a new Tools tab.

Inside the Tools tab, you’ll find the old versions page — which is useful to folks who are building custom Backstage plugins — along with a new Template Previewer.

As the name suggests, the template previewer lets you preview scaffolder templates in real time, so you can see what the resulting UI will look like.

This feature was contributed upstream by the prolific Phil Kuang. Here’s the PR. We’re just exposing it.

Phil included this nice demo video which gets the idea across.

In a small number of very specific repos, some customers experienced issues where Roadie pull request checks were blocking PRs which have nothing to do with Roadie.

We now only add roadie validator checks where a backstage related file has changed. Previously, we added a skipped check.

The new Roadie logo has rolled out to all Roadie Backstage instances. You’ll notice a change in the favicon and the sidebar. 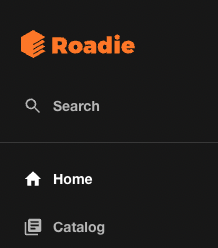 We feel this is appropriate now since we are soon beginning work on our first major proprietary features on top of Backstage.

We still do plan to eventually allow you to replace these logos with your own branding. Although I don’t have an ETA for that feature at this time.