There were some important milestones reached over the last 2 weeks so we’re going to skip past the pre-amble and get straight into the new features.

Merged in the last 2 weeks

99 pull requests were merged in the past 2 weeks. Here are the highlights…

A new version of Backstage search was merged last week. Here’s how the new search page looks in a Backstage example app: 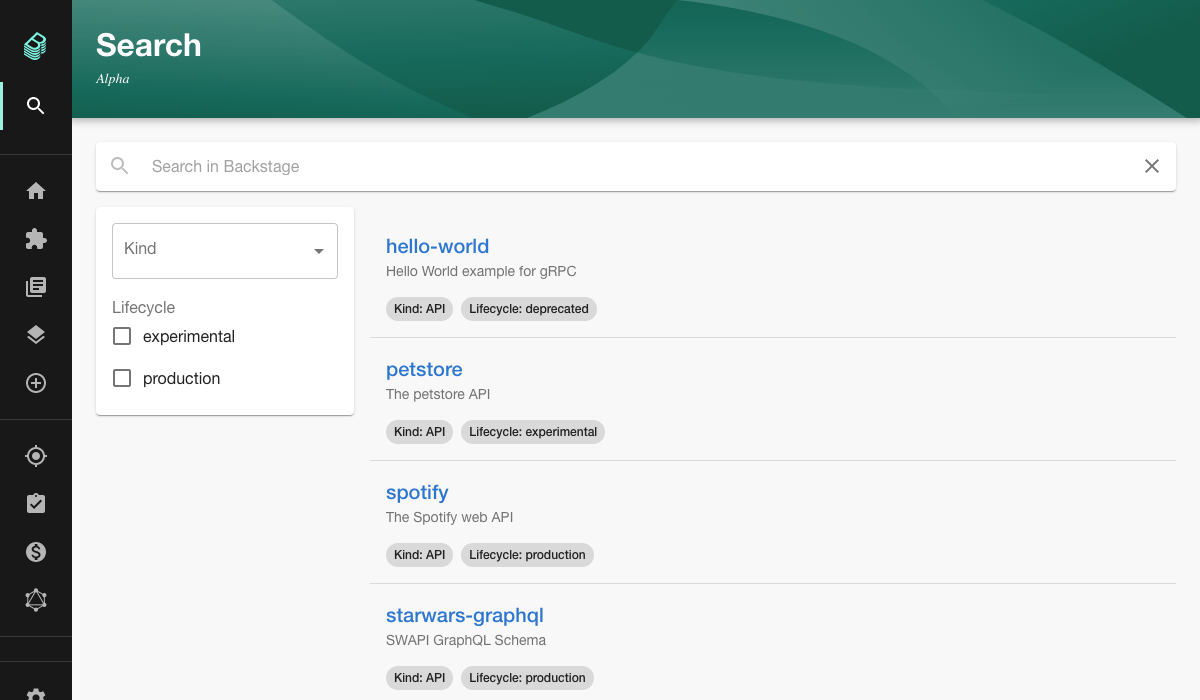 This release is the culmination of a lot of hard work by the search team in Spotify and includes the following features:

The docs have already been updated, so you can try this out immediately. The upcoming Beta and GA releases will include ElasticSearch support and support for searching within TechDocs.

Don’t miss this weeks Backstage Community Session where the search team will talk through the new features and how to use them.

Pull request #5825 splits the core package up into three new @backstage packages. This change should make life much easier for plugin authors.

Previously, plugins depending on different versions of @backstage/core would struggle to co-exist within the same Backstage application. If you and all other plugin authors didn’t frequently update plugin dependencies in lock-step, Backstage plugins could crash, sometimes taking out the whole application.

These new packages include a slimmed down core-plugin-api package which can run alongside other versions of itself, preventing the issue mentioned above. All the glorious technical details you could ever want are in RFC #4872.

Stay tuned for migration details. Some of that is still being worked out. The new @backstage/codemods package is being prepped in order to keep tedious manual work to a minimum.

We are prolific plugin authors here at Roadie and we really appreciate this change from the core Backstage team. Here’s to improved stability 🍾.

Oliver Sand from SDA SE added the ability to include conditional steps in your scaffolder templates - #5849. Code like the example below will add a checkbox to the scaffolder UI. Check the box and the step runs, leave it empty and it is skipped.

And here’s how it looks when the UI skips steps based on conditionals (see the “Skipped” steps in the card on the left).