What Spotify Backstage is

Practices like microservice, Software-as-a-Service reliance, serverless, and no-code have resulted in a more chaotic ecosystem for developers. Tech stacks are becoming more complex, leading to longer onboarding times and more complicated collaboration processes. These factors have derived the need for an Internal Developer Portal (IDP) where developers can navigate their stacks and resources. Backstage is the open-source market leader for creating an IDP.

Originally written by Spotify, Backstage is now an open platform for building Internal Developer Portals donated to the Cloud Native Computing Foundation (CNCF). By January 2023, Backstage is used by more than 600 organizations (700%+ growth in 2022).

An Internal Developer Portal is a portal that helps developers make sense of their engineering ecosystem. It aspires to improve software development effectiveness by helping developers focus on what they do best.

Spotify Backstage provides a centralized place to look up information about their tooling, services and architecture. It allows developers to understand what other teams are working on and how their environments are running. It can be thought of as a single pane of glass, or a hub for software development.

A service catalog, or software catalog, is a list of all of the internal software assets available inside a company. In Backstage, this can include services, systems, resources such as S3 buckets, and other concepts. It also includes groups of humans, who can own software in the Catalog. The Catalog allows users to “look up” internal systems to find information about them.

On a technical level, Spotify Backstage is a collection of TypeScript libraries which can be combined together to create a Developer Portal. The Developer Portal is typically organized and centered around a service catalog.

Spotify Backstage has been adopted by more than 600 companies (as of December 2022). Adopters come from varied sizes and industries, and include Netflix, American Airlines, LinkedIn, HP, Caribou, Snyk, and many others. Additionally, Backstage counts with the endorsement of industry leaders like the Linux Foundation, Red Hat, and Gartner.

The origins of Spotify Backstage

This section was written by Roadie Engineering Manager Martina Iglesias Fernández (linkedin). She previously worked on the Backstage Core Team at Spotify and was in the room on the day Backstage was first conceived.

Backstage was conceived inside Spotify at a time when the company was experiencing rapid growth. New engineers were joining every week, and with them, the number of microservices was increasing.

Collectively, Spotify’s engineering team realized that it was becoming more difficult to know what we had running in production, and who was responsible for each component.

Eventually, one of the platform teams decided to build a catalog of all microservices and to model systems and components in it. The catalog was called System-Z.

System-Z started as a place where Spotify teams could register microservices and their metadata. There would be a link to the code, the name of a team who owns it, and the name of the product owner. Eventually it grew to include information about its relation to other components, and groups of microservices began to be organized into cohesive systems. 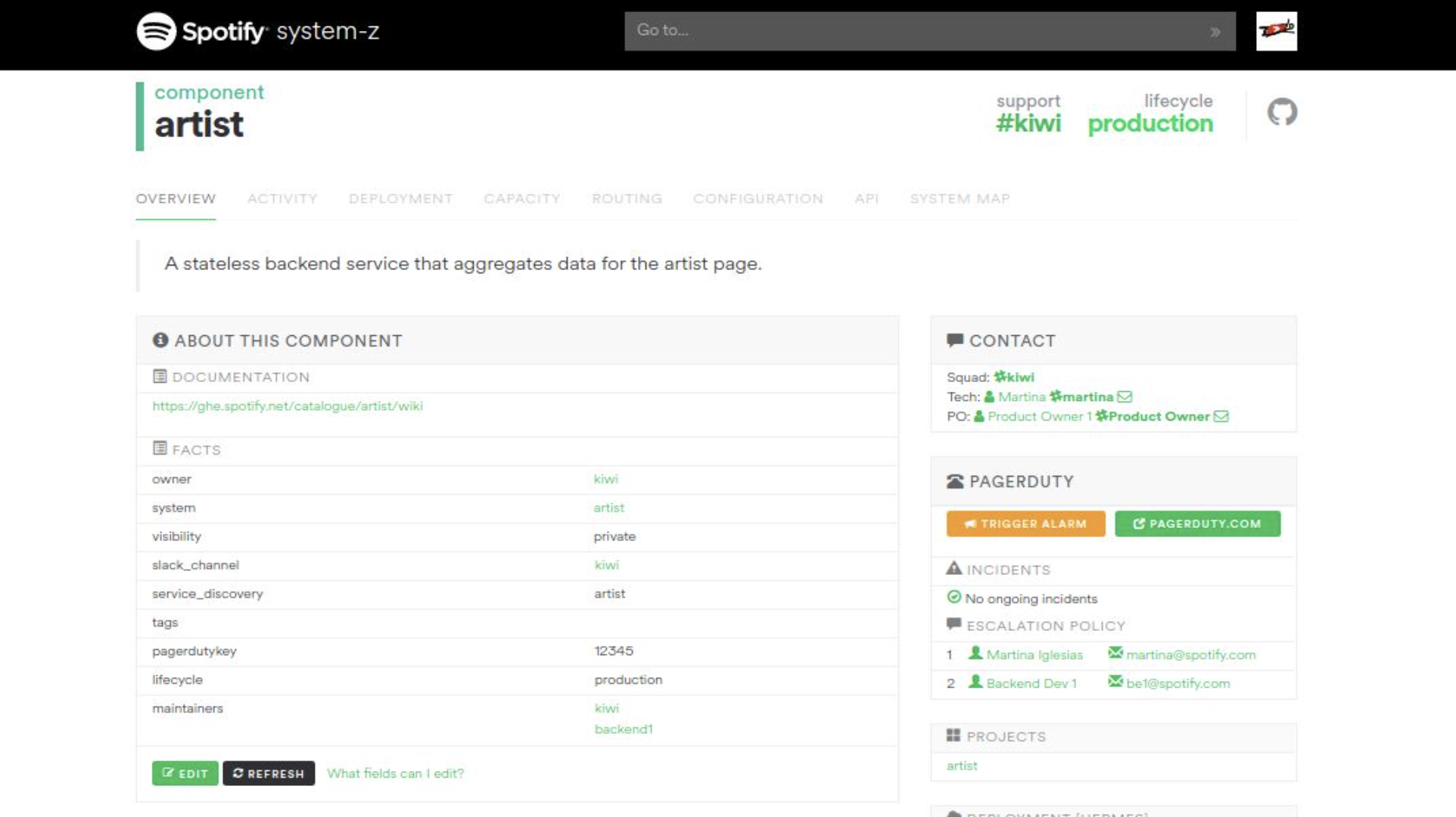 This re-organization process had a positive effect on the whole organization because ownership became very important. One of the key learnings was that many services were owned by individuals rather than by teams. This key insight highlighted the vulnerability of some systems, and helped bring in changes around microservice management and organization.

Luckily, the same team that built System-Z was building the internal microservices framework. This meant they could do something amazing. They added built-in endpoints on each microservice that would return API documentation based on introspection. This API documentation was a game changer because it came directly from the code and it was very easy to keep up to date. This move was the beginning of System-Z becoming the main hub for documentation.

As the usage of System-Z grew, we realized it was also the perfect place for us to put frontend UIs for developer infrastructure tools. So many tools that previously only had a CLI were extended to also have a UI frontend inside System-Z.

This huge growth of usage and features led to what is known as Backstage today.

Spotify Backstage helps to solve a number of different problems. They fall broadly into two categories: discoverability and governance.

Imagine you’re a software engineer who has joined a fast growing 100 person engineering team and it’s your first week on the job. You might have many questions… How do people ship code here? How do you create services? Is there a Geocoding API available? Do we have a tool for linting code? What languages are typically used here? What do the teams around me work on?

Modern engineering organizations are complex and rapidly changing organisms and it is not easy to get up to speed. Even when you’re an established part of the team, answering a simple question might take days of chasing people through multi-day Slack hops. And remote work is not making things easier.

Backstage solves this problem by collecting software, tools, teams, people and other assets into one place where they can be easily searched and organized.

The first step towards effective collaboration and InnerSourcing is to be able to easily understand who owns what.

The person who wrote any particular piece of code may have left the job years ago, so who is responsible for it? Who should get called if it starts causing issues in production? Frequently, this question is not always easy easy to answer.

Backstage addresses this problem by tracking teams and software assets, and making it easy to create a clear linkage between them. 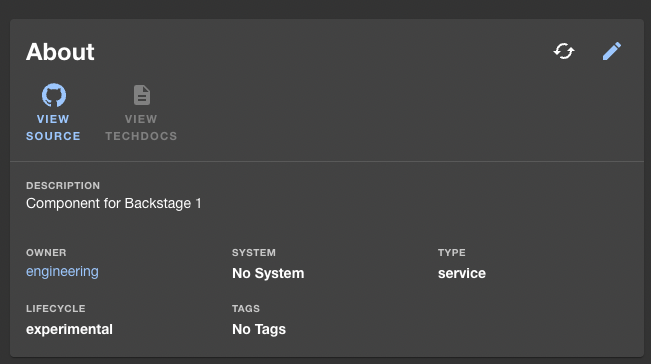 The path to production is frequently fraught with delays. You may have to talk to networking, security, platform, compliance, finance and a host of other stakeholders before you can get a line of code to run. These functions exist for good reason, but it can be tricky to create a clear path to navigate through them when doing something new. This hurts the pace of innovation and increases the time to value for new services.

Backstage solves this problem by making it easy to define pre-approved templates and create new software from them. These templates can include docs and tests. They can automatically connect newly created services to Continuous Integration and Continuous Delivery tools and they can set up monitoring and logging. This speeds up teams by giving them a Golden Path to Production which is fast to use and comes with the best practices baked in.

Once teams start shipping quickly, the production ecosystem can become complex. The best teams will have docs, runbooks, monitoring, logging, CI/CD, code review, protected branches and a host of other best practices. But not all projects have the expertise or resources to build in these best practices. We need a way to spot these struggling services and get them up to code.

Because Spotify Backstage tracks all the services and teams, it is the perfect place to detect when a standard is not being upheld and nudge the team who own it in a better direction.

This fracturing makes operations more difficult, since the operations people won’t always have the expertise on hand to debug a failing technology.

It also makes it more difficult to collaborate. The ramp up time is increased if you’re switching to a team with a different core language. You might even be trying to add a feature to another team’s service. This is slow if there are no docs and different technologies used.

Backstage’s software templates make the homogeneous option the quickest way for developers to get started, so they tend to choose them over forging their own path. At the same time, if they need to do something bespoke, they can always break out of the system.

The main features of Backstage by Spotify

Spotify Backstage is fundamentally a flexible, plugin based system, which can be modified to suit your use case and the internal tools you already love. It’s designed to integrate with existing systems, rather than replacing them.

The software catalog lists all of the software assets in your company, and allows you to associate them with engineering teams and the people on them. It supports many different kinds of software asset, including Websites, Services and Libraries. It also supports infrastructure assets called Resources.

Each entity in the software catalog is described by a specification, usually written in YAML. Here is an example of a basic Service, as represented in Backstage.

Most of Backstage’s functionality, including the software catalog, is delivered in the form of plugins. The plugins allow you to mix and match the tools which make sense in your particular situation. For example, if you use Opsgenie instead of PagerDuty, there is a plugin you can add for that.

Plugins typically export UI components which you can code into your Backstage application so others at your company can use them. Plugins can be written in JavaScript or TypeScript.

The plugin marketplace is full of open-source plugins you can easily get started with.

Backstage uses a docs-like-code approach where documentation is written in the form of Markdown and stored alongside the code. The markdown files are then transformed into HTML and rendered inside Backstage where they are searchable and organized by Software Component. This makes them easy to find, which means they get used. This makes them more likely to be written in the first place. 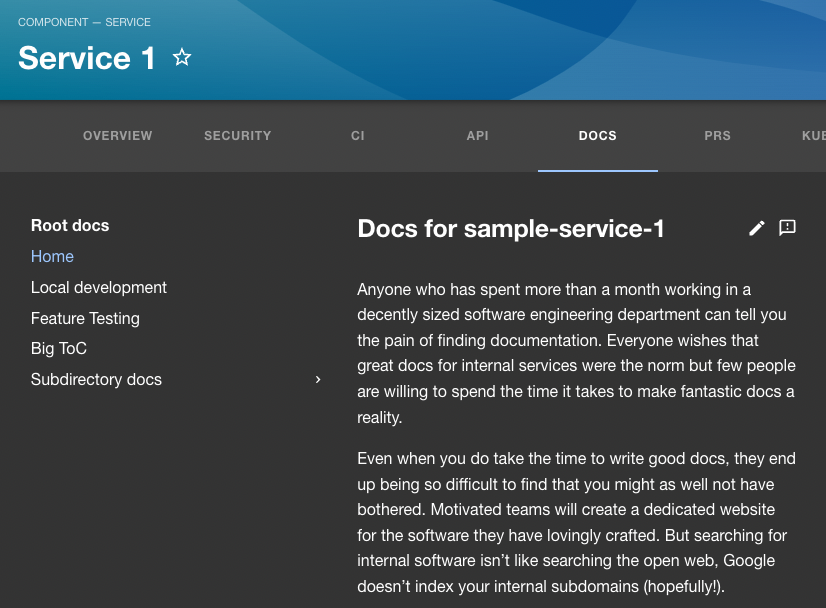 You can hear how Spotify benefitted from TechDocs in this edition of the Changelog Podcast.

Software templates allow you to encode your organization’s best practices into YAML templates which can be used to scaffold new services.

Each template will typically do a few things:

The Kubernetes plugin is a core part of Backstage. It connects to your Kubernetes clusters and provides people with an easy way to see how software is running in the clusters. It makes it easy to look up running pods, image versions and deployment errors.

The use cases of Spotify Backstage

Backstage is oriented around three main use cases: Create, Manage and Explore.

You can learn more about the use cases in this excellent blog post from the Spotify Backstage team.

Creating a new microservice, mobile feature, data pipeline, or other software asset, is made easier by the software templates and scaffolder. Within a few clicks you can go from nothing to having a fleshed out component which is already connected to all of your favorite tools.

Backstage plugins come together to pull information into one place so it becomes easier for teams to manage a number of microservices, and for an organization to manage hundreds of them. Instead of switching between tools you can do everything you need in one place.

Since everything can live in Backstage, your tools, software and teams all become more discoverable and approachable. This improves collaboration and engineering effectiveness.

How to get started with Spotify Backstage

There are 2 ways to get started with Backstage. Self-hosting and Software-as-a-Service hosting with Roadie.

We’ll cover the high level differences here, but if you need more information, you can check out 10 reasons to get Backstage from Roadie.

Self-hosting Backstage requires creating your own Backstage application by combining together the core Backstage TypeScript libraries. Once you have an application created, you can install plugins which make sense for your use case.

At a high level, the steps required are:

Please refer to the getting started guide for the exact steps and instructions.

Roadie is a SaaS Backstage provider. It allows you to get set up with Backstage quickly, simply by providing some configuration and dragging and dropping some plugins to the places you want them.

The main advantages of Roadie are:

If you’d like to try Roadie, please request a free trial.