Last week, the very first BackstageCon brought along news from influential firms voicing the maturity that the Backstage project has achieved. At the moment, Thoughtworks, Red Hat, Gartner, VMWare, and the Linux Foundation endorse Backstage as a viable solution for improving the developer experience of growing engineering teams through a Developer Portal. 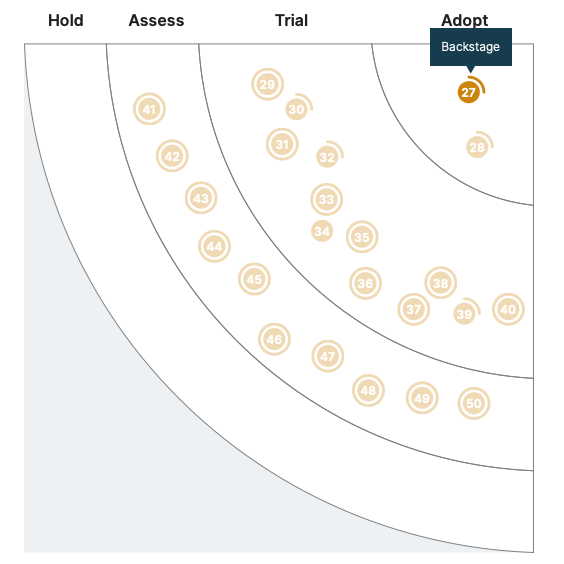 In the most recent Tech Radar, Thoughtworks moved Backstage to Adopt in their Platform quadrant. This means that their advisors “feel strongly that the industry should be adopting” Backstage. And in fact, Thoughtworks offers Backstage as part of their digital transformation offering to their customers.

On the other hand, Red Hat announced that they will start actively participating in the Backstage community. They will be contributing to the framework to support OpenShift and improve the Kubernetes experience in Backstage.

Additionally, VMWare has been a commercial partner of Backstage offering it as a UI for a security product in their Tanzu suite. VMWare has committed an Open Source team dedicated to contribute back to Backstage Open Source.

Previously this year, Gartner reported on Backstage as a solution for Developer Portals. It also mentions Roadie as a solution to tackle the complexity of adopting the framework via de self-hosted route.

For Roadie customers, this news means you’re about to get all the benefits from the substantial contributions of a robust community without having to do anything. It also shows you’re on the right track by adopting Backstage through Roadie!