TechDocs is the core Backstage feature which transforms markdown documentation into HTML and displays it inside Backstage where your engineering teams can find it.

There are two ways to set up TechDocs in Backstage, the Basic approach and the Recommended approache. But how do they work and which should you use?

Read on to find out.

First let’s see what the basic experience gets us and how it works.

Use git to clone the main Backstage repo. We have used this point in the history but most versions should work. Run yarn install, yarn tsc and yarn build to prepare the codebase and then start it with yarn dev.

Backstage should shortly be running on http://localhost:3000. Sign in as a guest, add this sample-service to your Backstage catalog and navigate to its docs tab.

Once the loading process completes, you should see some docs. Simple! 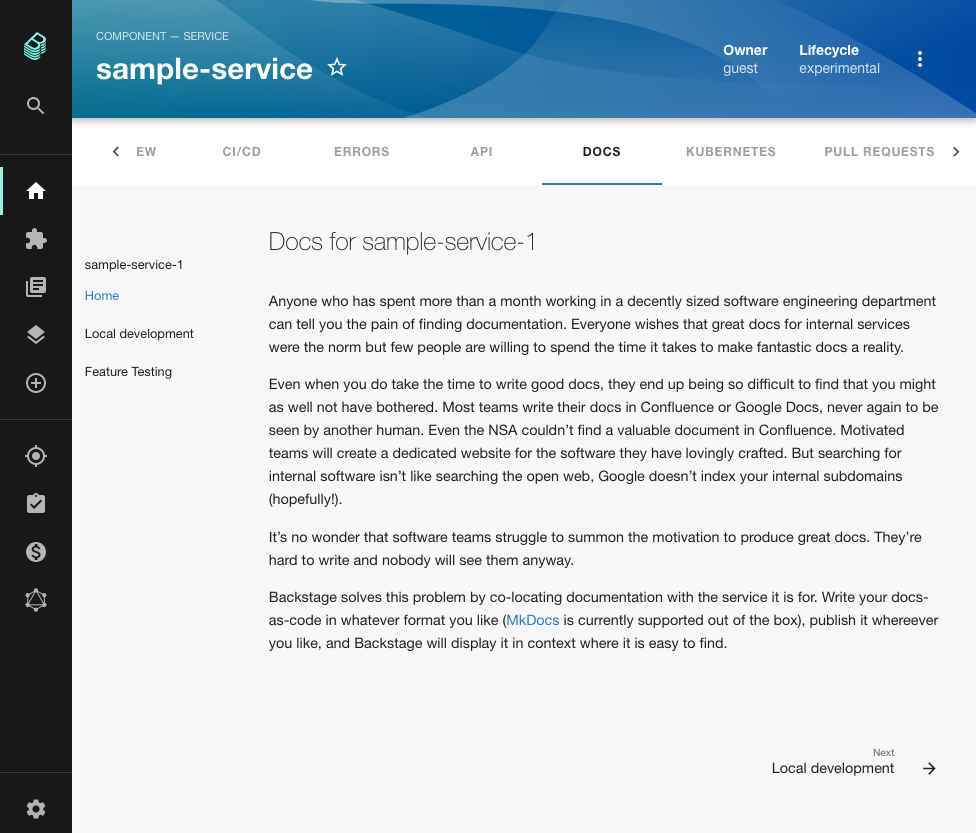 Let’s take a look at what actually happened under the hood.

Docs were generated and displayed because Backstage detected the backstage.io/techdocs-ref annotation contained in the catalog-info.yaml file of our sample-service. This tells Backstage that there are docs available which it should show to the user.

There are three actors involved in building the docs: the preparer, the generator and the publisher.

The preparer cloned the sample service repository into a temp directory on our local machine so the docs can be accessed.

The generator then downloaded the spotify/techdocs image from Docker Hub. This image contains Python, a few dependencies and a Python library called mkdocs-techdocs-core. The generator ran this library against the docs directory of the sample-service in order to convert the markdown files located there into HTML, CSS and JS files.

The mkdocs-techdocs-core library is a wrapper around two other libraries, MkDocs and Material for MkDocs.

So MkDocs is generating a static website and Material for MkDocs is styling it. What’s next?

Once the documentation site has been stamped out into a temp directory, it must be moved somewhere where Backstage can access it.

The publisher is responsible for this step and by default it chooses to move the documentation to plugins/techdocs-backend/static/docs/default/Component/sample-service-1/ . If you open this directory you will find a sensible structure containing HTML, JS and CSS files. You should notice a clear similarity between these files and the docs you see in Backstage.

Now that the files are on the filesystem, the TechDocs frontend can simply request them and insert them into the browser’s DOM as a shadow-DOM. That’s how they end up in the page where you can see them.

This basic architecture is easy to get started with but it has a number of downsides:

For these reasons, the TechDocs team recommends a CI driven architecture for generating and storing docs.

The idea is that a process, like a GitHub action or other CI build, runs every time there is a change to the markdown files which contain our documentation. This process uses the mkdocs-techdocs-core library to convert the markdown files to a static website just like before. However, instead of writing the resulting HTML, CSS and JS files to the local filesystem, it pushes them to an object store like an AWS S3 bucket. From here, Backstage can request them when needed and render them in the browser for the user.

Converting to the recommended architecture

To convert our basic setup to the recommended architecture, we need to make a few changes. We’re using AWS in this example but Google Cloud Platform, Azure and a host of other platforms are supported. We’re also using GitHub Actions but CircleCI and others shoud work too.

We need the following things:

Follow the official AWS documentation to create an AWS S3 bucket. Aquire an Access Key ID and Secret Access Key which will authenticate requests to your bucket. You will also need to note the region your bucket lives in.

Add a GitHub Action to your component to do the markdown to HTML conversion and push to S3. The official Backstage docs have a really good example of the code required. Don’t forget to create secrets in your GitHub repo to store the bucket name and AWS credentials you created earlier.

Edit the app-config.yaml file in your Backstage repo.

The techdocs section of your app-config.yaml should now look like this:

Restart backstage, with the AWS credentials present in the environment variables:

From now on, when you merge a change to the default branch of your GitHub repo, a GitHub action will run to generate and publish docs to S3. From there, Backstage will request them and show them to the user.

Converting your TechDocs from the basic to the recommended setup brings a number of advantages and it only takes a few minutes to switch over one repo.