The open governance of a project determines who has influence and control beyond what is legally required in an open source license.

Anyone can become a maintainer. To become a maintainer, you need to demonstrate commitment to the project, the ability to write good code and collaborate effectively with the Backstage team. There is also now a clear nomination process for new maintainers. To learn more, check out the GOVERNANCE file in the backstage repo.

Backstage recently claimed a spot on the Assess ring of the Thoughtworks Technology Radar.

In the Technology Radar Vol. 23, linked below, Cassie Shum, Head of Cloud Partnerships at Thoughtworks, mentioned that many of their clients are trying to standardize the tools and technologies they use and introduce lean governance to their organizations. They believe that increasing consistency can streamline development and reduce the time to market for new services. Cassie sees Backstage as a way to do that because it makes “discoverability a first-class citizen”.

58 pull requests were merged last week. Here are the highlights.

In a great demonstration of collaboration, a SonarCloud/SonarQube plugin was added to Backstage this week by Dominik Henneke of SDA-SE. #3160

A SonarCloud plugin was originally requested by Julien Lind at Decathlon on the 23rd of October. SDA-SE responded that they had already built this internally. Then they open sourced it within 7 days for everyone else in the Backstage community to use. The power of open source is right there for everyone to see! 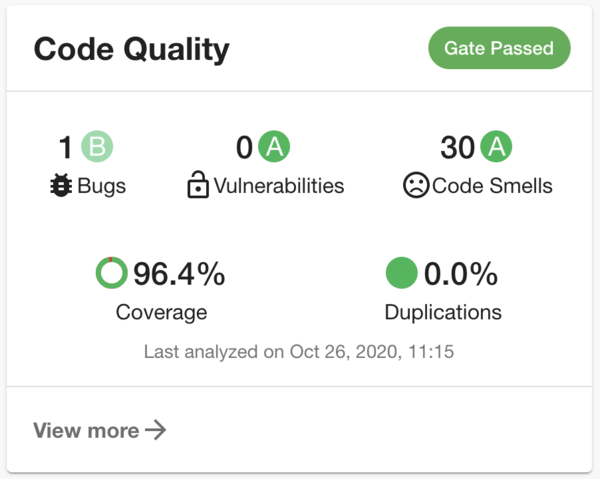 The SonarCloud plugin isn’t the only thing that SDA-SE have been working on with respect to Backstage. Oliver Sand added a way to validate component metadata files before adding them into the catalog #3013. I can imagine this concept being expanded to include validation steps in CI/CD steps in the future.

Last but not least, Backstage version Alpha 26 was released this week. It contains one important breaking change to the way configuration is loaded.

Your app-config.yaml will still be loaded by default, but if you were using an app-config.development.yaml or other specific file, you will need to change the way you run Backstage.

That’s all for this week. Get upgrading and good luck! 🚀